Hi,
I have successfully built the klayout 0.27.7 under windows 10 using the instructions at https://www.klayout.de/build.html (section: Building KLayout on Windows (Version 0.26))

However, when running the generated exe, I am receiving the following error:

The application failed to start because it could not find or load the Qt platform plugin "windows" in "". Reinstall the application may fix this problem.

Kindly note that the environment variable $Path has the following paths in it:

Vstudio 2017 is installed on the system.

Initially Qt was not installed as it didn't seem to be required according to the instructions in https://www.klayout.de/build.html. Probably because it seems that anaconda already has many of the Qt binaries and dlls required.

After receiving this error though, I installed Qt 5.12.2. yet the error still not fixed.

Finally I installed the binary Klayout on the same machine from the installer to make sure there is no issue in the environment, and was able to use the installed Klayout without errors. However I need to build klayout from the source as I might add customization to the source code.

Here is as well a screenshot of the files generated by building klayout based on the instructions in https://www.klayout.de/build.html 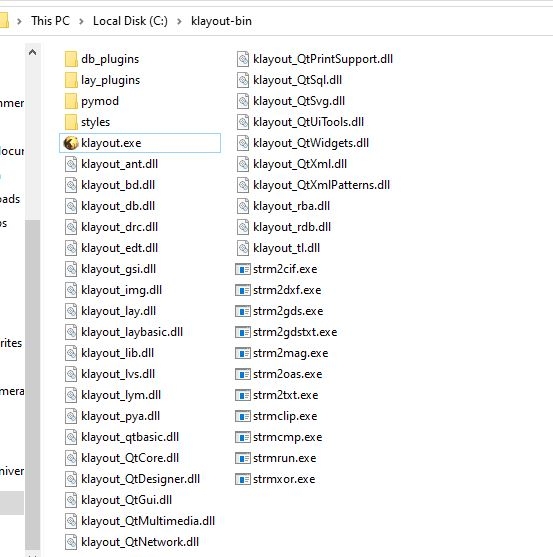 I am running out of options and would greatly appreciate any pointers or suggestions.

For example, Do we really need to install Qt in order to run the built klayout exe ? and even if this is the case, still this didn't solve the error..

Is there a way to generate more detailed logs from executing the klayout.exe that would point out exactly what is the problem in more details?

I used DbgView.exe with options enabled to capture everything and tried to detect any more details regarding this error, yet I didn't find any error related to the process of Klayout.exe